10 QUESTIONS WITH: THE TEXAS NATIONALIST MOVEMENT 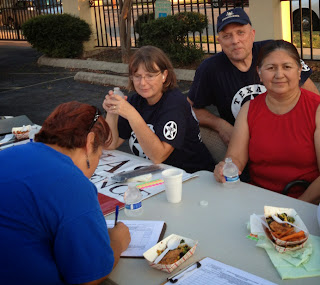 Von ormy—While enjoying our weekly Wednesday morning caldo de res at Benjamin's Kitchen last month, the staff  of The Von Ormy Star encountered a curious fellow gathering signatures for a petition outside. To each passerby he asked, “Do you support Texas Independence?”
Most people we observed agreed and many signed the petition, so the Star decided to ask the Texas Nationalist Movement—the group circulating the petition—the following  10 questions.  Von Ormy was a hot bed of revolution in 1836, but tell us what you think of the contemporary movement by email us at vonormystar@gmail.com.

1. Why was the Texas NationalistMovement in Von Ormy collecting signatures?

Members of the Texas Nationalist Movement are in Von Ormy seeking signatures from Texas registered voters, to place a referendum on the 2014 general primary ballot for the Republican Party that states:  “the State of Texas should reassert its status as an independent nation.  FOR OR AGAINST”.

2. What is Texas Nationalism?

From the book: Line in the Sand by Daniel Miller Pages 113-114:
-Texas is a nation with a distinct cultural, economy, and government.
-Texas should always be politically, culturally, and economically independent.
-The basic political building block of Texas is the individual.
-The basic economic building block of Texas is the entrepreneur.
-The basic cultural building block of Texas is the family.
-Texians are defenders of natural rights.
-Texas adheres to the values of fortitude, loyalty, righteousness, prudence, and broadmindedness.
-Texas Nationalism is the primary secular cause of all Texians and is distinct and superior to all other secular causes.
-The interests of Texas supersede the interests of all other nations and states.
-All political power is inherent in the Texian people, and all free governments are founded on their authority, and instituted for their benefit. The Texian people have at all times the inalienable right to alter, reform or abolish their government in such manner as they may think expedient.
Texas’ unique history serves as the foundation for our current and future greatness.
-There is no challenge that cannot be overcome by the individual initiative and collective will of Texians.
-Texas will again be free and independent.

3. What is the Texas Nationalist Movement?

The Texas Nationalist Movement is composed of liberty minded individuals that believe in peacefully restoring and protecting a constitutional Republic in Texas.  Texas Nationalism is a mindset of freedom.  As our Founding Fathers gave their resources, wealth and lives to establish free Republics; Texians have the opportunity to live these principles of freedom.

“What We Believe:
We believe in the complete, total and unencumbered political, cultural and economic independence of Texas.

Who We Are:
We are the largest organization of men and women all over Texas, from all walks of life, who work for a free and independent Texas.”

4. How do you plan on achieving Texas Independence and does the plan include armed conflict?

“First of all, there is no manual for independence. There is no set process. Even though the world has grown from 54 recognized countries at the end of World War 2 to 192 at the end of the 20th century, each took its own unique path. However, there are some guide stones that must be met. The most important is that there must be a fair vote on the issue of independence by the people of Texas. No matter what happens before or after, there must be a legitimately recognized vote of the people. In Texas, the road to that vote leads through the Legislature in Austin. There it can be obtained by a simple bill calling for the vote or an amendment to the Texas Constitution. Either way, the support of ½ or ⅔ of the Legislature and possibly the Governor will be required. That support is obtained by pressuring existing elected officials or replacing them. Pressuring or replacing them is done by the people. Which brings us full-circle. The people that pressure or replace will be the same ones voting for independence. No matter where you are in the process, the people are the ultimate deciding factor in getting it done.”

5. Would Texas Independence be legal?

From the Texas Nationalist Movement Website Frequently Asked Questions.
“It is not illegal to withdraw from membership in the Union as no law exists which makes it illegal nor could one exist and be congruent with the fundamental construction of the Union. Were secession of a State from the United States declared illegal it would so fundamentally alter the nature of the relationship of the states that the very act of doing so would serve to end the Union.”

6. How would Texans benefit from Independence?

Independence would free Texas from the unconstitutional mandates of Washington D.C.

Texas by having a limited constitutional republic as the Founding Fathers brought forth would have the opportunity as a nation to have a small Jeffersonian government. Texas would practice free enterprise, establish tax rates that would attract business; which in turn translate to more available jobs, and greater prosperity for citizens of the nation.

7. Can Texas survive as an Independent Nation?

Yes. Texas is similar in population and Gross Domestic Product (GDP) to Australia.

Such politicians are comfortable with the status quo. As Texans see the continued implementation of socialist/communist policies by the federal government; they recognize Texas as a nation where freedom and liberty can have true expression.

10. Von Ormy is 90% Hispanic; would an independent Texas embrace its Hispanic heritage?

Yes. In Von Ormy there is great support for Texas Independence.  All those that love Liberty and Freedom are welcome to investigate the Texas Nationalist Movement.

The Von Ormy Star does not endorse the TNM, but presents their answers here without editing.