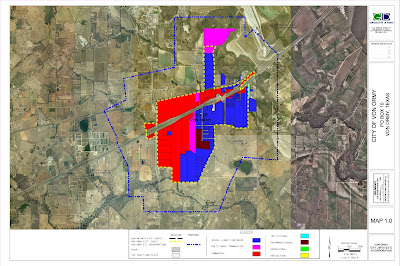 VON ORMY — In  a series of 4 - 1 votes the new City Council has moved forward with the process of zoning the city. Zoning is a land-use planning method used to separate uses that are thought to be incompatible, such as industrial uses in a residential neighborhood. The term “zoning” comes from the fact that zoning organizes the city into various zones or districts in which certain uses are allowed.
In recent votes, the Council has adopted both a preliminary map and preliminary comprehensive plan that identifies the current land use situation of the city and proposes zones for the city.
The preliminary plan creates the following zones, single-family residences, multi-family communities, commercial, institutional, governmental/school, recreational/green space, agricultural.
The once quiet, rural and residential neighborhoods of Von Ormy are feeling the effects rapid growth spurred by the Eagle Ford Shale development.
Mayor Art Martinez de Vara told the star, “Among the chief concerns that we have is the increased number of heavy trucks operating and driving through the city.  Through zoning we can address this problem head on by restricting commercial trucking operations from our residential neighborhoods.”
This sentiment is reflected in the preliminary zoning plan which states, “The community seeks to minimize the presence of heavy axle transportation through city streets, particularly Benton City South.”
The plan goes on to state , “The City of Von Ormy strives to preserve and protect the interests and property rights of its land owners while still encouraging economic development within the City in particular and region as a whole.  The City of Von Ormy will act to preserve the “Von Ormy Heights” area as a predominantly residential area with mixed-use development to be considered along its boundaries, primarily on Benton City Road and Von Ormy Road.  Seeking to capitalize upon its coveted location, the City will actively market and push for commercial development along its IH-35 North and South as well as TX LP 1604 frontages as these areas are the most feasible for efficient provision of water, waste-water, and electric utilities.”
Housing in Von Ormy would be far more marketable if it can be guaranteed that less-desirable businesses will be distanced from the community; zoning allows this.    Zoning will also allow the city to restrict the location of sexually oriented businesses and industrial facilities.
When asked whether zoning will effect existing uses, Mayor Martinez de Vara responded, “this zoning plan only effects future land uses, so all existing uses are grandfathered.  Additionally, there will be a process for the granting of variances because sometimes it makes sense to grant an exemption.  For example, a day care facility next to a school.”
Public hearings on the preliminary zoning plan and map  will be held July 24 and August 7 at 7:00pm in the Parish Hall of Sacred Heart Catholic Church on I-35 in Von Ormy.