VON ORMY—On July 3 Jarret Fire Department was dispatched to assist Acadian Ambulance with a fall. A construction worker had fallen approximately 30 feet from a concrete casing that is being built for sewage lines in the area. Upon arriving on scene near Queesenberry Road and Somerset Road, firefighters found the patient at the bottom of the casing with injuries to his back and chest. Command was established on the scene and a request made for assistance from Somerset Fire Department for use of their ladder truck and high angle equipment. 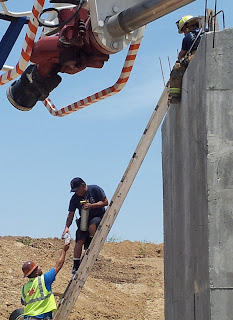 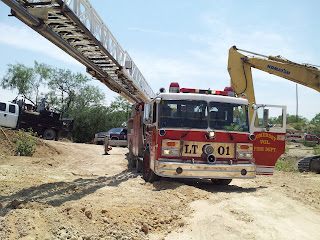 Firefighters David Gonzales and Robert Coronado were sent into the casing via a ladder to acces the patient and provide any medical treatment. Somerset’s ladder truck arrived and high angle/confined space rescue operations began. Asst. Chief Dugosh took command of the  high angle operations and positioned the ladder trucks ladder over the casing. Lines were lowered down to the crew , along with a stokes basket and the patient was secured to it. Everyone that was on scene , Bexar County Sherriff Oiffice, Acadian Ambulance crew, construction workers and firefighters manned two lines to hoist the patient and one firefighter out of the casing and onto the ground safely.  High angle operations were terminate and the patient was transported via Airlife to University Hospital.
While high angle rescues are very rare for Jarret, the department routinely trains for such incidents, as well as other infrequent emergencies, such as swift water rescue, hazardous material incidents and agricultural rescue.  With the increase in industrial  development in the area, such emergencies are becoming more common and the fire departments are  adapting to stay prepared.