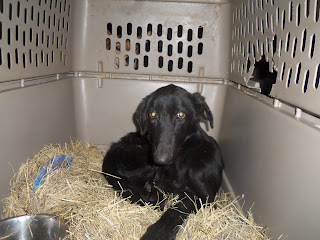 This is a story about two dogs, the fate of both of them was set into motion the second that they were abandon by their former owners. Lets us begin with the first story; It is late at night and a call comes in to Animal Control, a loose “dangerous” animal is in an open field near livestock. We respond to find a very unusual dog; he seems to be a Chow, beagle mix running up and down the fence line looking for a way to get out. He comes right over to us and we notice how thin and full of fleas and ticks this guy is. Being abandon in a rural area his coat is matted and full of mange. We pick him up and place him inside of a travel kennel and start to head for home, on the way out we are stopped by another concern citizen and alerted to the second dog in this story.
We get home and start cleaning up the dog known now as “Pumpkin”, he is a unaltered male, about two years old and is clearly not a danger to anyone. A happy dog, he tries to get along with everyone. He was about ten pounds underweight, full of parasites inside and out, we know he has a long way to go before we can try and find him a new “forever” home.  After several medical treatments “Pumpkin” is ready for adoption, and the long wait begins. Now he is an odd mix of dogs so we hold our breath and take him to adoptions events with the hope that someone will find him interesting enough to give him a home.
While at an event we notice that a young boy keeps looking at “Pumpkin” and asking his mother to look at him, at the time we did not notice that the boy was special needs child. His mother told us that they were there looking for a service dog for the child, something that would be able to help the boy deal not only with his physical need, but his emotional ones as well. I was thinking that it was a long shot at best, this was a dog we found in a field in a small Texas town, what were the chances that he could be trained?
Oddly enough, they were a perfect fit! All the effort, money, and work we put into that animal had a great payoff. “Pumpkin” after training is now helping this child with his anxiety attacks, alerts the parents BEFORE the child starts a seizer, or gets help in case the child has an attack while no human is around. One man’s trash was another man’s treasure. Our two month investment in a discarded animal had a beautiful payoff!
Now begins the story of the dog we found on the way out, alerted to us by a resident. This was Sweetie Pie a black lab mix that was abandon in the middle of a busy area. She was forgotten for several weeks, was almost impossible to find or catch. By the time we got to her the outlook was bleak; she was about 20 pounds under weight and could no longer stand on her own. She was so thin you could see the outline of her intestines through her paper thin skin. We carefully took her to the truck, I watched the people eyes on us and we gently lowered her onto a blanket in the back. In situations like this one, there was very little we can do, so we started back home to what was going to be Sweetie’s last ride.
When we got home we knew that there was almost nothing we could do for her, the condition she was in left us little to do but put her down.  We can’t save every animal that we catch, but it still pains us when we can’t. Lucky for Sweetie a friend of mine, another rescuer saw something in her eyes, a reason to try and save her. She spent many long hours, and many dollars to save her, both that we don’t have a lot of. Both of these animals were saved from a small Animal Control that cares, and people that care. Please remember a pet is a lifelong commitment, and please help curb the pet population by spaying or neutering your pet.
Footnote;  Sweetie is alive and well at Tri City Animal Sanctuary where she will live out the rest of her natural life along with blind, lame and senior dogs from the area. “Pumpkin” and many others are serving the police force, military, and as service animals. All saved by the Von Ormy Animal Control and Hope for Dogs.