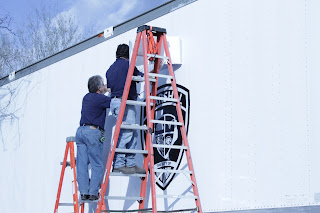 VON ORMY– The Von Ormy City Marshals have a new place to call home.  The City recently purchased a mobile command station that will serve as their first permanent home.
The command station was purchased from government surplus is being refitted to  serve the  Marshals’ needs.
The command station was placed in the city Park near the upcoming Jarret Fire Station.
Mayor Martinez de Vara said, “We placed the Marshals’ Office in the park to provide additional security for residents enjoying the park and  because of its central location in the city.  I think visitors to the park will feel safer knowing that the Marshals are right there in the park.”
In order to reduce costs city staff, volunteers and Marshals have been working to install internal office spaces, communications and  flooring.