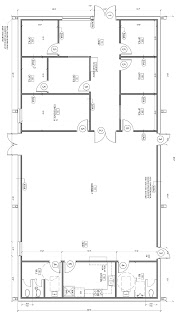 VON ORMY— At a special meeting called March 21, 2013, the Von Ormy City Council approved  a final floor plan for the Municipal building  purchased last month.
The main reason for delay was to insure that the building will be accessible to persons with disabilities.
The building will serve as part community center and part city hall.  The building will house offices for the City Clerk, City Administrator, City Marshal and Mayor, as well as, a walk up window.
The community center functionality includes a kitchen, restrooms and open area for large gatherings including city council meetings, elections and municipal court.
The city will now move forward with bids for construction of the building, which will be located in the city park on Quarterhorse Road.