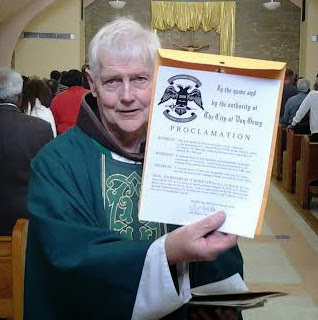 VON ORMY—Fr. Edward Boren O.F.M. celebrated the 50th anniversary of his ordination with a mass at Sacred Heart Church in Von Ormy  on January 26, 2014, fifty years to the day since he presided over his first mass in 1964.
Father Ed is affectionately remembered as the parish priest of Sacred Heart, who in 1982 oversaw the construction of the parish’s current church building.
Mayor Art Martinez de Vara presented a Proclamation honoring Fr. Ed for his service to the community.  The Mayor recalled how Fr. Ed located and returned the historic bell that belonged to the first church in the area.  The bell had been lost after a fire destroyed a previous building in 1918.  . The jubilee mass was well attended and the celebration continued in the parish hall with a Mexican dinner and Irish music.
Fr. Ed Boren is originally from Indiana and a member of the Franciscan Order.  He has served most his 50 years in Texas and currently serves at Mission San Jose.