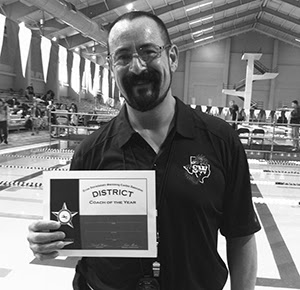 Staff Writer
VON ORMY—The Southwest Dragon Swim Team is coming to the end of a record setting year.
On February 1, 2014, the Dragon Swim Team competed in the UIL District 28 5-A Championship Swim Meet at the Aquatic Center at Palo Alto College. At the meet the  Dragon Swim Team broke four school records in four relays and twelve athletes have qualified to compete at the UIL Region 7 Championship Swim Meet to beheld at the Josh Davis Natatorium on Feb 7th—8th.
Head Coach Jerry Hernandez told the Star, “I've been coaching the Southwest High School Dragon Swim Team since the 2006-07 school year and after six years winning a District Championship Title in both Boys and Girls divisions in 2012.”
Southwest can attribute its recent success to Coach Hernandez whose coaching talents were recognized this year by being named the District 28  5-A Boys Swim Coach Of The Year for 2013-2014.
Coach Hernandez continued, “Hopes are high again this year. The SW Dragon Swim Program is becoming  very competitive every season and we hope to build and develop the program by taking it to the next level.”