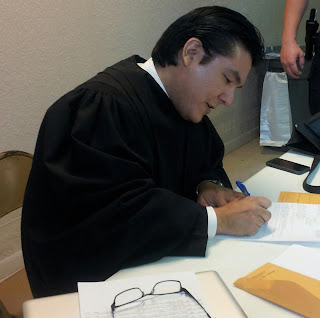 VON ORMY- The San Antonio Young Lawyers Association (SAYLA) annually awards distinctions to individuals for their contributions to the justice and legal communities in San Antonio.
This year’s “Outstanding Young Lawyer Award” was presented to Von Ormy Municipal Judge James A. Rodriguez.  SAYLA describes the criteria for the award as “a young lawyer who has demonstrated professional proficiency, service to the profession, and service to the community.”
The citation with the award states, “James A. Rodriguez, a solo practitioner focusing on family law was named as the Outstanding Young Lawyer. James is a regular participant in many SAYLA and San Antonio Bar Association (SABA) programs and events. James was recently honored by SABA as the Community Justice Program Pro Bono Award 2011, Outstanding Volunteer Lawyer because of his frequent participation in the SABA Community Justice Program providing pro bono legal services to lower income individuals. James also serves as a mentor to many other young lawyers, providing guidance and advice on family law matters, opening a law office, and many other issues of importance to attorneys who are just starting their careers.”
Judge Rodriguez has been Presiding Judge of Von Ormy since the court was established in 2011.