VON ORMY—Von Ormy City Council unanimously passed Mayor Art Martinez de Vara's proposed 10% property tax cut at its September 19, 2012 meeting. This
marks the third year in a row that Von Ormy taxpayers will receive
double digit tax relief. Mayor Martinez de Vara said, "We have
focused our efforts on essential municipal services, creating a
business friendly environment and sharing the success of our economic
development with our residents via tax relief."
The economic upturn in Von Ormy is reflected in its rising sales tax revenue.  2012 sales tax receipts surpassed 2011 in September of this year, despite the temporary closure of the city’s largest sales tax producing business for remodeling.  In fact, the city received the largest sales tax receipt in its history in October 2012 (for sales conducted in Sept. 2012). 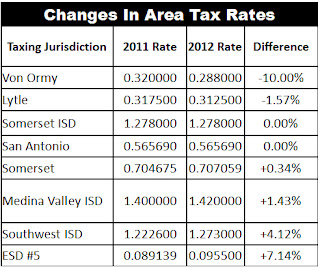 Due to increased activity in the Eagle Ford Shale oil field, Von Ormy is partially shielded from national unemployment rates.  However, the national economic crisis is still being felt locally, most noticeably in the rising cost of everyday goods.  The value of the dollar is falling noticeably due to a sharp increase in the number of dollars being printed by the federal government to pay for its massive increases in deficit spending over the last three years.
Simply put, when the government puts more dollars in circulation, the value of each dollar is diminished.  In order to receive the same value as before, sellers increase prices.   And when salary increases do not keep pace with the devaluation of the dollar, working families carry the burden of federal deficit spending through diminished spending capacity.  Mayor Martinez de Vara noted, “Most of our residents are tightening their household budgets due to the rising costs of food,
gas and other necessaries. Responsive government understands the need to tax less during such times and return as many dollars as it can go into family budgets, where it can do the most good."
Despite a weak dollar, prospects for future increases in city revenue are bright.  Three new restaurants opened in early October, as well as, an expanded Pilot Travel Center.   Mayor Martinez de Vara said, “increasing revenue will allow us to enact further property tax relief in the future, exactly how much remains to be seen.  This year we roughly split the increase between tax relief and increased budget expenditures.”
Von Ormy has one of the lowest property tax rates in Bexar County, yet the 2012 budget includes expanded city services such as fire
protection, regular litter control, street lighting on I-35 and the
continued construction of the new city park and a municipal building/community center.
The 2013 city budget is focused on a series of building projects, particularly a municipal building, park and fire station.
In preparation for a year of building, the city created a capital improvement fund in early 2012 to save for and large one time expenses. The fund was seeded with $100,00 from past city surpluses.  Additionally, the City ended fiscal year 2011 with $96,000 in carry over (surplus).  The city maintains additional reserves slightly in excess of a $100,000 in its emergency reserve fund.