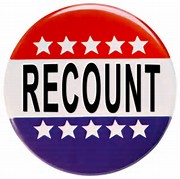 
The recount resulted in the same results that were announced on election day.


The petitioners were required to pay a $200.00 deposit which is now forfeited to the City to cover the expenses of the recount.   The City Commission is required to canvass the results of the recount and report the official result to the Texas Secretary of State.   The City of Von Ormy changed to a Type C City on November 9, 2015.
Posted by Von Ormy Star at 5:02 PM